Album of the Month... February 2015
Eternal Misery by No Zodiac 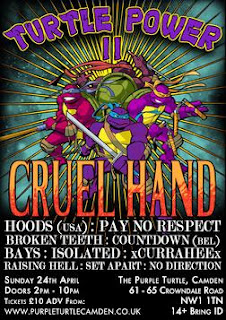 Hardcore all-dayer going on at The Purple Turtle in Camden today. Get down to it if you can, it's definitely not too be missed. Review will be up in the next few days as well as some other updates.
No comments:
Email ThisBlogThis!Share to TwitterShare to FacebookShare to Pinterest

Foundation: 'At Your Mercy' 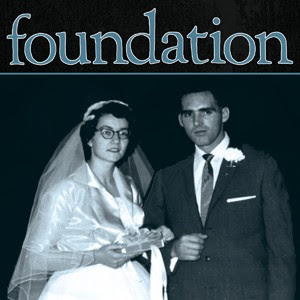 Atlanta’s Foundation have released a 3 track EP which features three brand new songs that includes a Path of Resistance cover of the song ‘Counter.’ The song ‘At Your Mercy’ will be on their forthcoming full length ‘When the Smoke Clears’ which is due to be released in May. This style of hardcore sound has a massive influence from the 90s, which is why I think this band is amazing. 90s style hardcore is probably my favourite and after hearing these 3 new songs I am really excited for their new full length, which is less than a month now!
The first song ‘A Thousand Ways’ sets the whole tone of this EP with a heavy metallic hardcore sound in the vein of Trial and Turmoil. It’s an incredibly catchy start to this EP and will leave you feeling fulfilled. It’s not just the riffs and musical sound that makes this EP happen, but also the in depth lyrical content that Foundation have worked so hard to develop. Taking the foremost topics of everyday life, the lyrics dive deep into a more individual’s perspective of day to day affairs that we have to put up with in this world. I am one hundred percent sure that the impact of this EP and their new album will be colossal and will surely go down well in the current hardcore scene.
I was also really impressed with the cover of Path of Resistance’s song ‘Counter’ as I am a big fan of this band as well. I am always a bit hesitant of covers, but this song works well and I liked the slight change of sound to it. Also, the general sound of this band have got a little more heavier than their previous releases ‘Hang Your Head’, their self-titled and the split they produced with Meantime, but do not let this put you off, as this EP has a fantastic sound to it. Prepare for the grooves and the breaks as this is not to fall upon deaf ears.
I have been a big fan of this band since they started and from their first EP they have always managed to produce unbeatable songs and have managed to progress greatly. These new songs are great and I am sure the follow up to these with the new album will be phenomenal. Get into this or you’ll regret it. Pick up the pre-release 7 inch from Bridge Nine now http://www.bridge9.com/disco/215
No comments:
Email ThisBlogThis!Share to TwitterShare to FacebookShare to Pinterest
Newer Posts Older Posts Home
Subscribe to: Posts (Atom)

Previous Album of the Month